Some goblin archers for my oldhammer games.

[Sellswords] Battle Report: The Healing Witch of Via Nano

Today I played the fourth scenario of my Solo campaign of "Sellswords & Spellslingers". The basic scenario was from the rulebook: The healer pg57.

Sabrina, the Healing Witch, has lent her services to wounded adventurers, refusing her services to raiders and criminals. A gang of Brigands has decided to end the healer's life once and for all.

Amron wanted to meet Sabrina, called by the locals the "Healing Witch", an healer that lived near the "Via Nano". He was sure she could teach to him some of her alchemical secrets.
He was displeased to see that some vile brigands were approaching threateningly to the house of the healer.
Amron: "I will not miss the opportunity to expand my arcane knowledge! These brigands are an unpleasant obstacle, they must be eliminated! The healer must live, at least until I will need her, of course..."

Overview of the board with foes and PCs deployed. 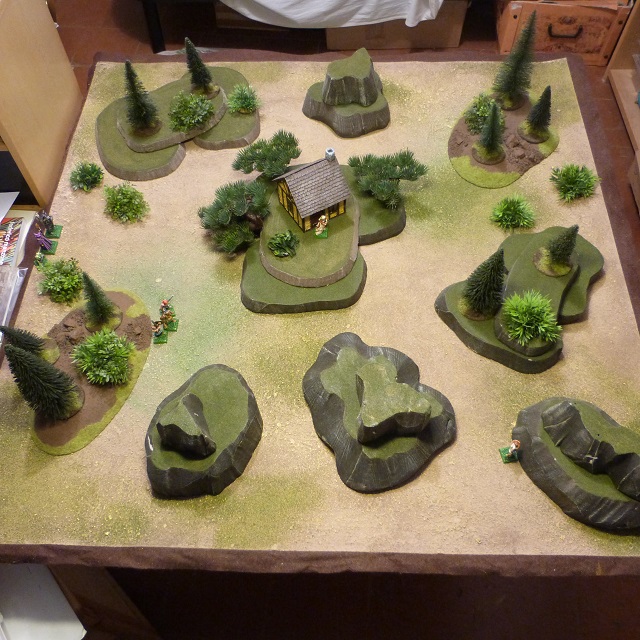 The healer house. Sabrina the Healing Witch is hiding in her hut during the game. 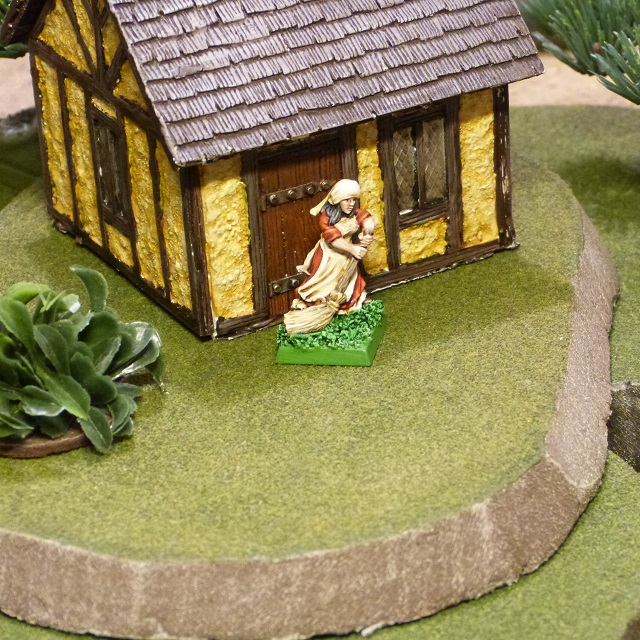 Border Princes map (red star indicate the place where the scenario is played, zoom the picture) 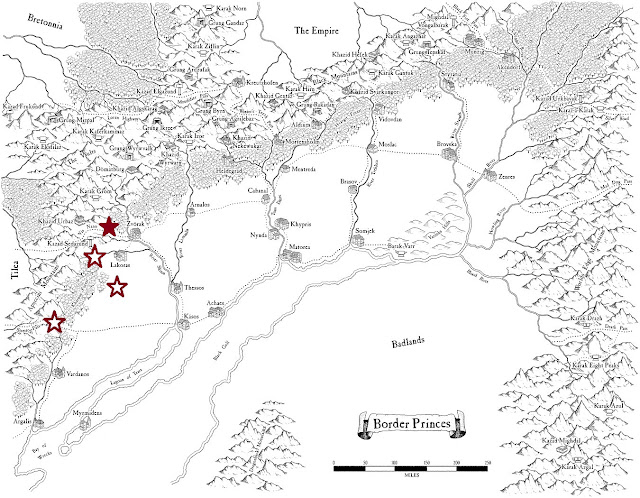 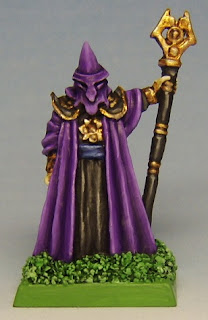 AMRON MALIOCCO GRACIALE "the Bringer of Hope"  20xp
Traits: Spellcaster (20xp), Fireball (5xp)
Negative Traits: Greedy (-5xp)
Silver pieces: 130 Equipment: Scroll of Heal
Amron is the bastard son of the rich merchant and explorer Dante Graciale of Tobaro. He is an half elf. His father never said much about Amron's elf mother. He simply told him that his mother chose his name before abandoning him and that she was a witch. Being an half elf and the result of an illicit relationship, Amron could not be officially recognized by the Graciale family, however his father grew him as his son and he could enjoy a comfortable life. When he was an adult, he finds out to have the spellcaster gift and his father paid a magician to teach him. Dissatisfied with the limiting lessons of his teacher, he decided to begin a journey in the Border Princes, where he could test is magic skills and learn magic faster. 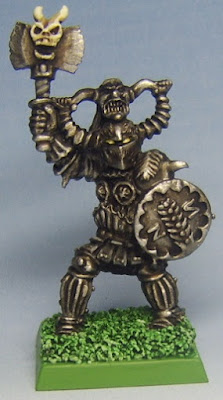 DAETHSKAR "the Dark Knight" 35xp
Traits: Armor lvl2 (12xp), Fighter: Axe lvl3 (15xp), Shield lvl2 (8xp)
Negative Trait: Burly
Silver Pieces: 227
Daethskar is an animated armor, created by Amron during one of his magic experiments.
He is the loyal body guard of Amron. He follows and protects his master wherever he goes. 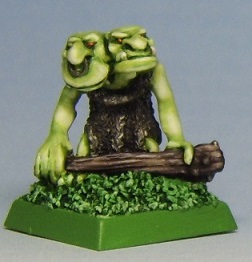 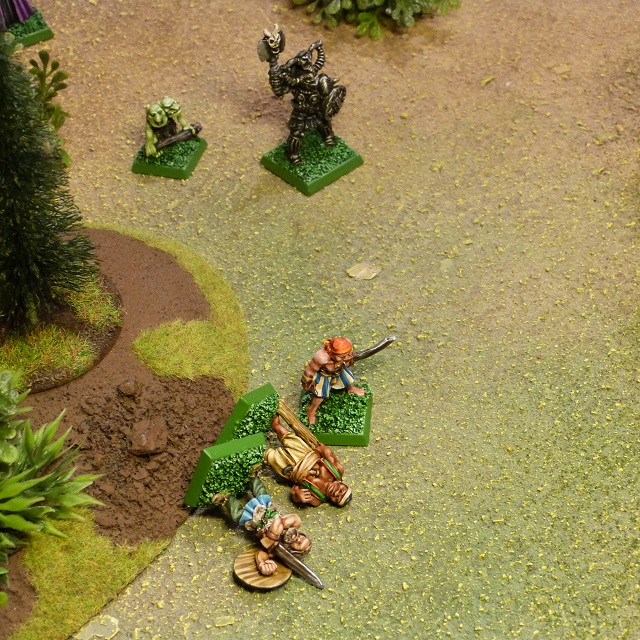 with a good shot of his fireball, Amron burns two brigands, meanwhile his minions are advancing...
Amron: "Anyone who opposes to my will must burn!" 😈 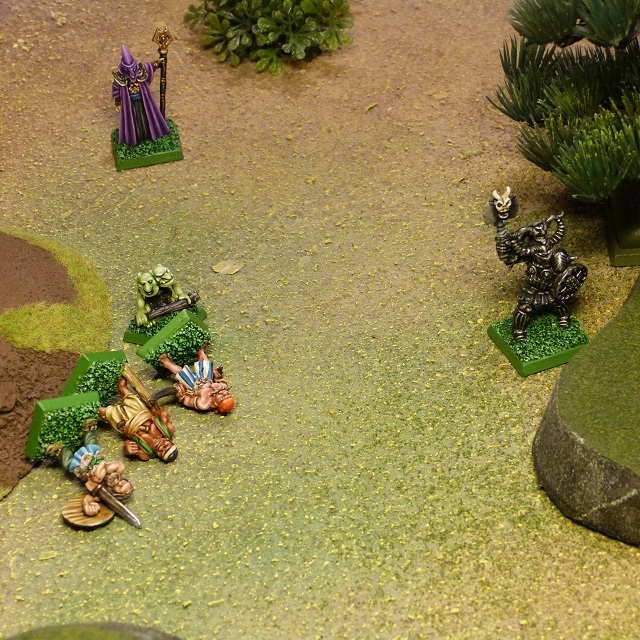 Amron finish the last brigand of the horde with another fireball.
Amron: "Too easy..." 😒 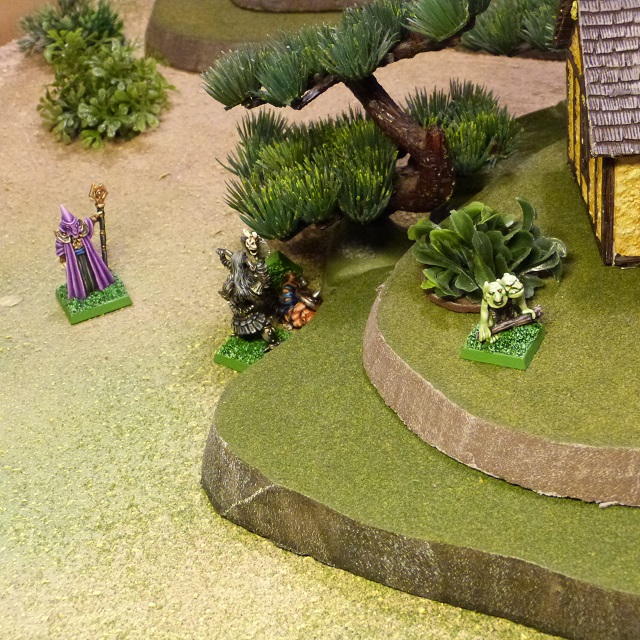 A brigand try to ambush Daethskar, but he is quickly killed by the dark warrior.
Amron: "These brigands are so weak, it will be easier than I thought..." 😏 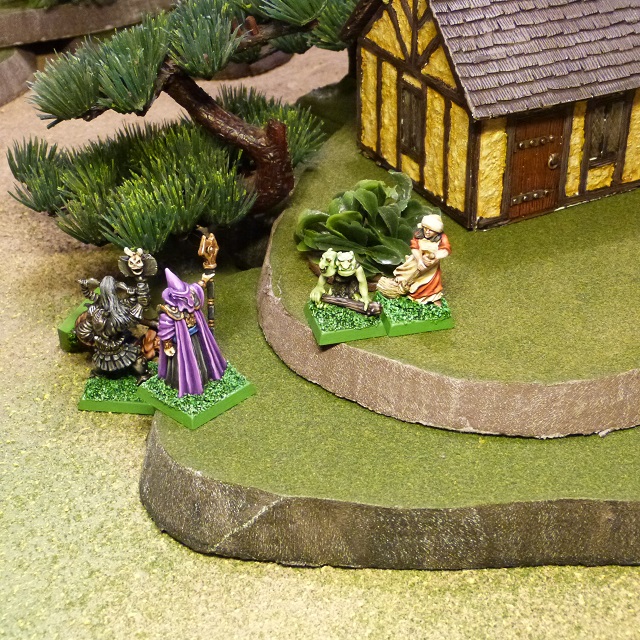 Daethska gain the treasure from the dead brigand, while "The Twins" enter in the house and take out of the house the healer. Amron cast another fireball and the boss of the brigands is gone too.
Amron: "Do not be afraid. We are here to protect you, come with us if you want to live." 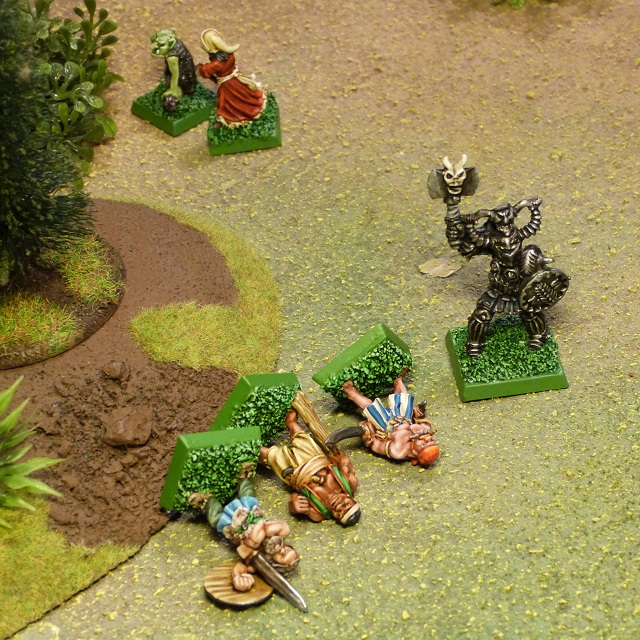 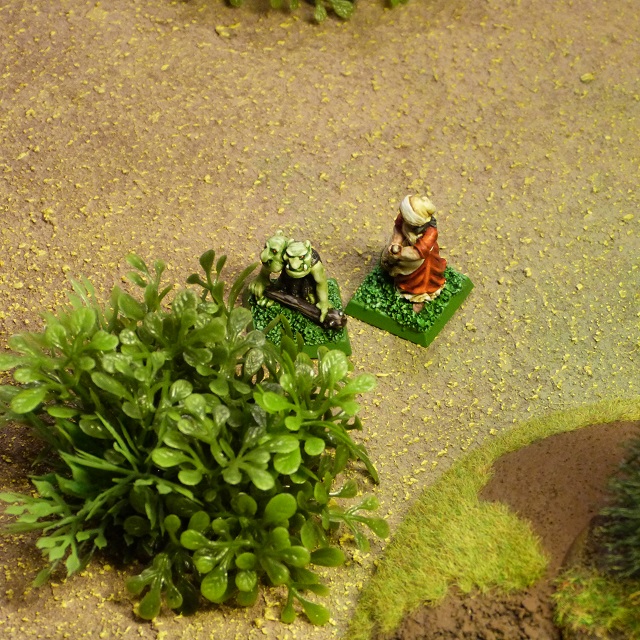 The twins moves fast with the healer towards the edge of the board. Daethskar and Amron cover him. 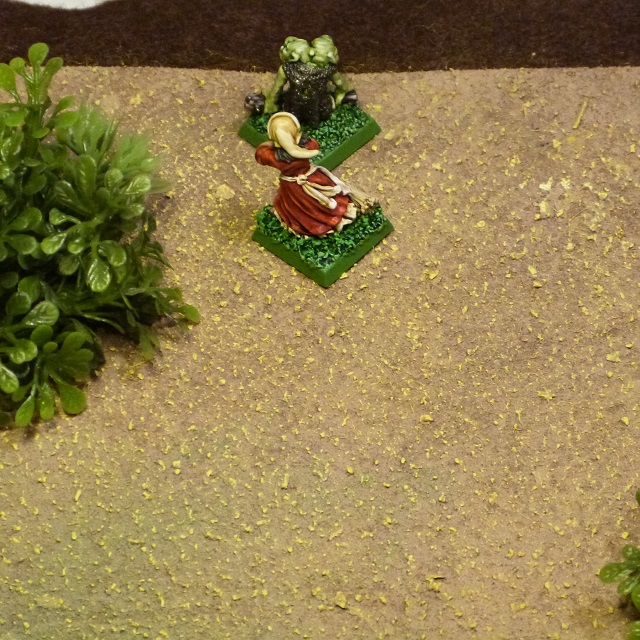 The Twins finally carry to safety the healer.
The Twins: "You safe, now. Master come soon to speak."

The PCs gain a reward of 3xp, and 16 silver pieces.
The healer is grateful and teach to Amron how to brew healing potions (the alchemy trait at half cost to produce healing potions only)

Posted by Katsuhiko JiNNai at 23:00 No comments:

Two citadel pre slotta pirates and a barbarian. I will use them as brigands in my oldhammer games.

Posted by Katsuhiko JiNNai at 18:08 2 comments:

A not citadel miniature I will use as a brigand leader for my oldhammer games. 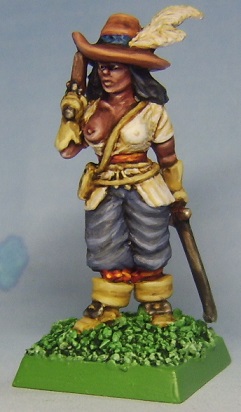 Posted by Katsuhiko JiNNai at 14:13 3 comments:

I painted two pre-slotta miniatures: a wizard (maybe a necromancer) and a dwarf. 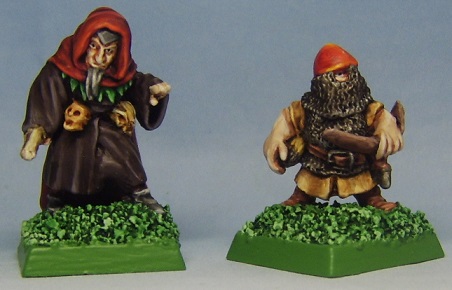 Posted by Katsuhiko JiNNai at 13:38 2 comments:

Some pre slotta lesser goblins I painted for my oldhammer games.

Finally I've found two miniatures that could be good as the companions of the warhammer guy.
A bretonnian/feudal knight and an elf archer (with a weird face). I was looking to paint the same characters from the Warhammer 3rd edition cover, but I found only one miniature (a fighter with kettle hat) that was really done as a miniature (the warhamer guy is an oldhammer style sculpt done by Kev Adams in recent times). Then I should try to find some oldhammer miniatures with the same style of the characters in the cover. 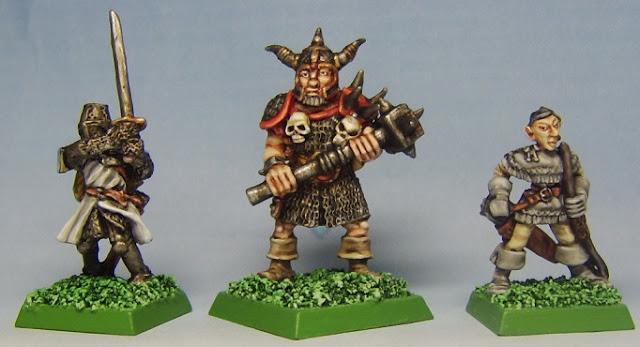 The elf was painted trying to replicate the same paint scheme of the elf character in the back of rulebook. 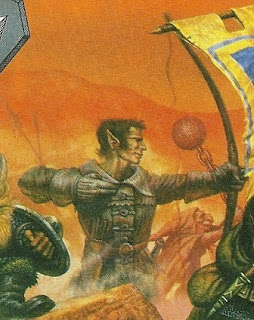 The knight was ispired by the feudal knight and paint scheme from the cover of the rulebook. 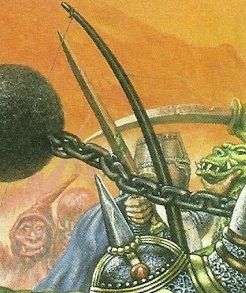 Posted by Katsuhiko JiNNai at 16:32 3 comments:

As the first update to my Knight Hospitaller I repainted the helmet with face mask.
I chose a type of white cross pattée because from several sources I've seen, it seem that it was the most common type of cross identifiable on the painted helmets. 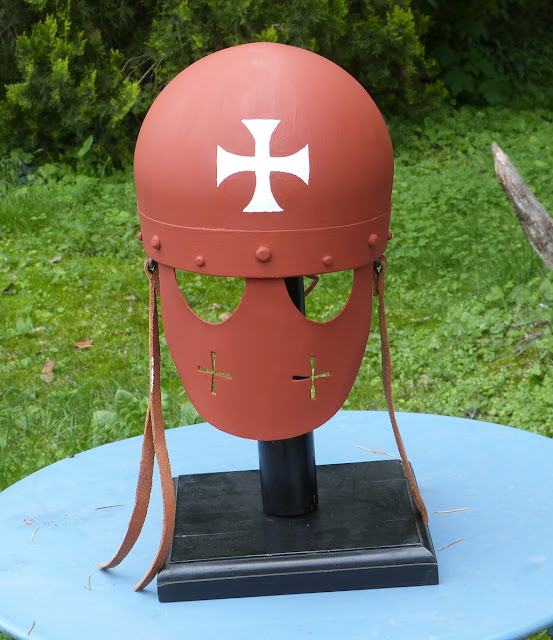 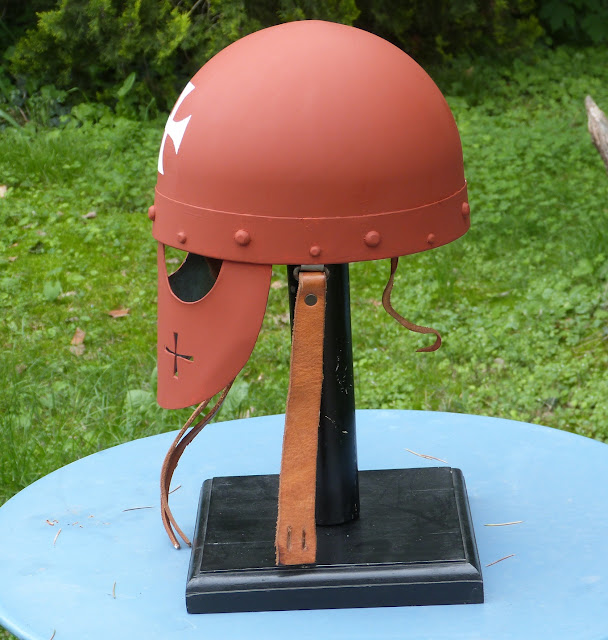 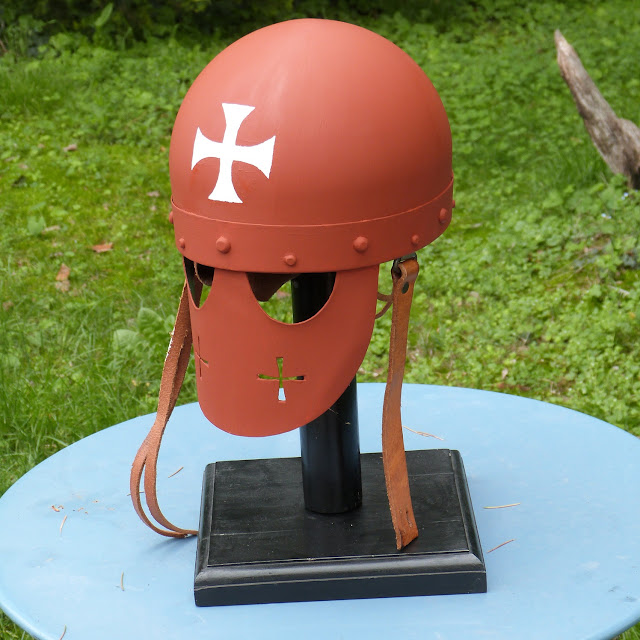 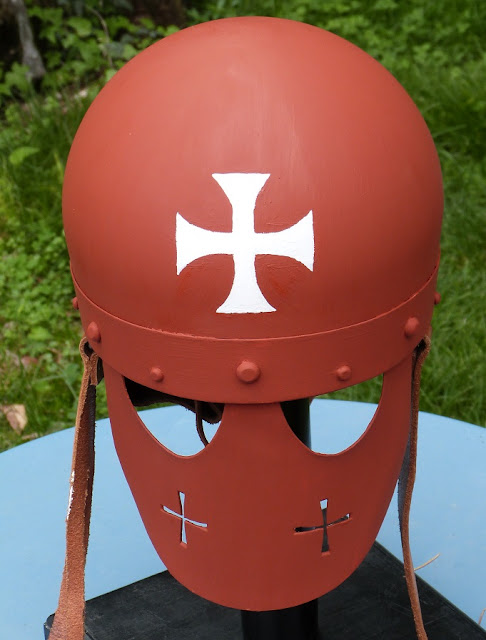 The iconographic source for the red ochre paint scheme:

The iconographic sources for the painted cross on the helm: 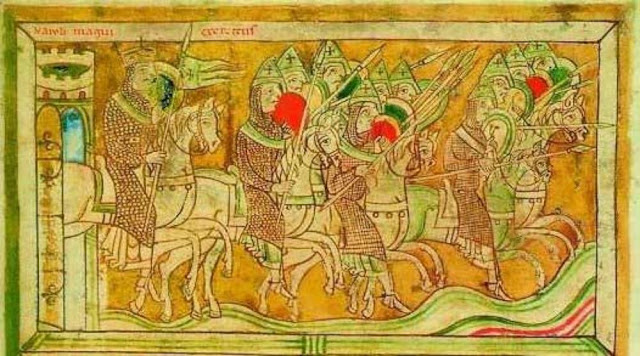 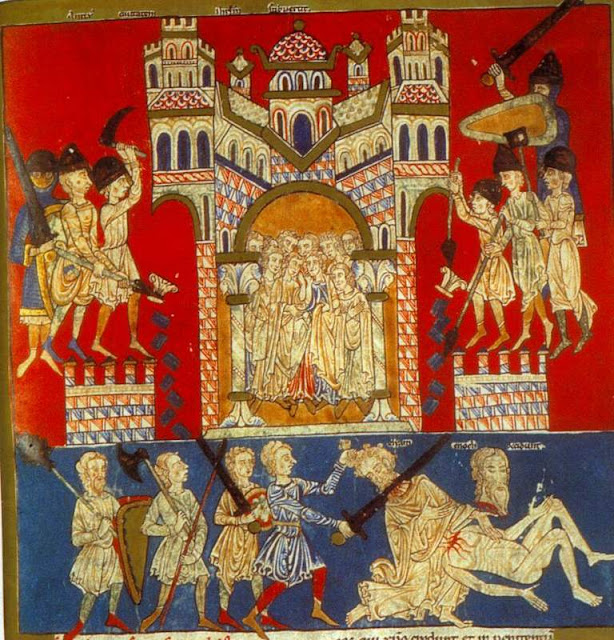 The helm unpainted, commissioned to an italian artisan and reenactor in 2010. 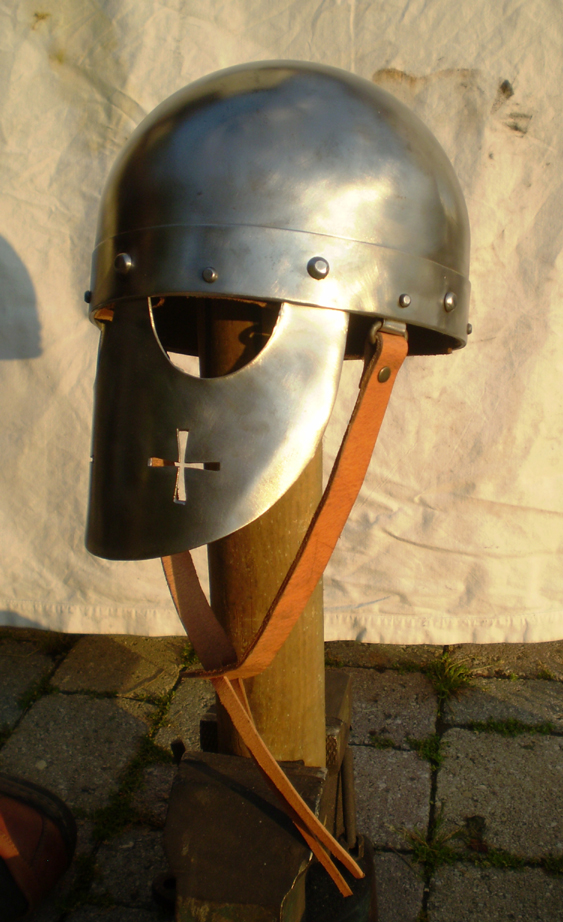 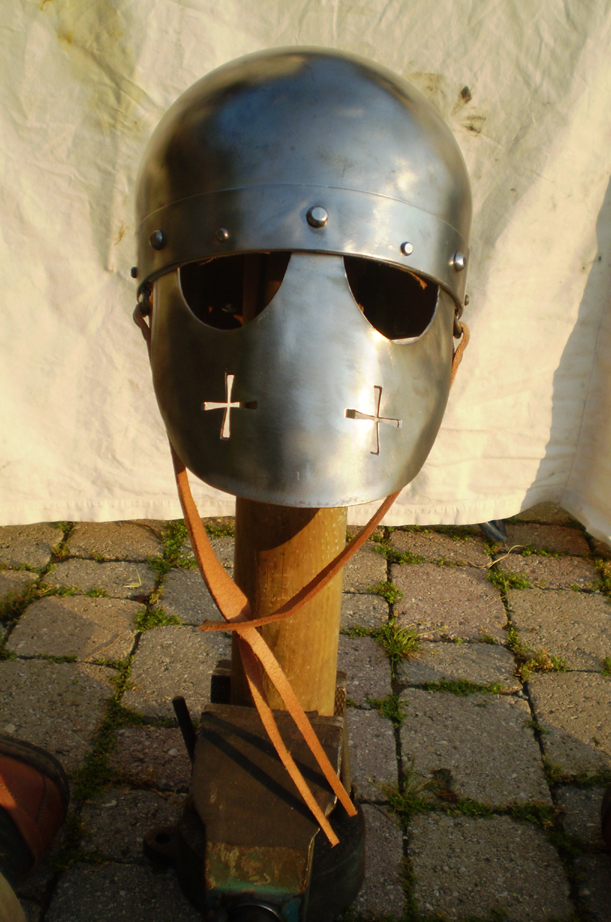 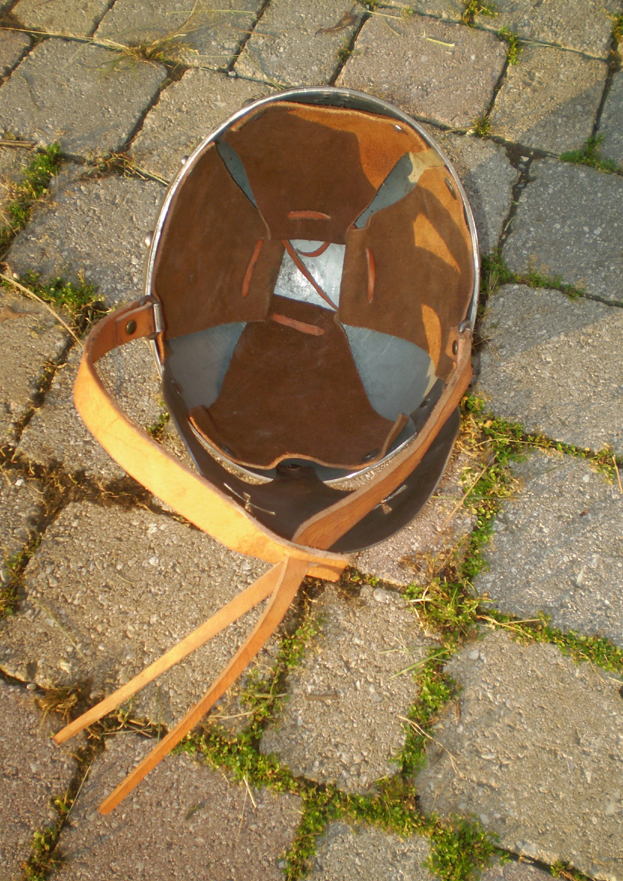 Posted by Katsuhiko JiNNai at 13:40 No comments: