Here another league I've done last year.
The league is about a gang of dahomey natives lead by a Bòkônon (priestess of Bò), the occult scienze in opposition to the vodun religion.

Models: 8 figures
Posted by Katsuhiko JiNNai at 14:37 No comments:

Here another Pulp Alley league I painted last year. This league will be often the antagonist (often bot league) of the Baker Expedition, Legio Prometheous and Red Ribbon in the jungle campaign I'm playing.

The tribal women are the guardians of Themiscyra an ancient town hidden in a forgotten valley deep in the jungle of central africa (congo-south sudan). The hidden town is ruled from thousand of years from the mysterious green skinned Goddess-Queen Talestri. In thousands of years, no intruders could violate the hidden town, the few that could break the first defense of the tribal women were all destroyed by the great powers of the Queen-Goddess or by her Cyclops: GORT.
From the beginning of the colonial age, protecting the secret town is harder than in the past, few european explorers and adventurers approached the town, but all vanished in the jungle. Now, rumors from the natives about the ancient town of Themiscyra and her Queen-Goddess Talestri have reached the ears of some europeans, that consider the voices not simple legends and want to investigate... for archaeological purposes, desire of adventure or lust for powerful artifacts... 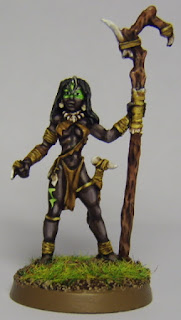 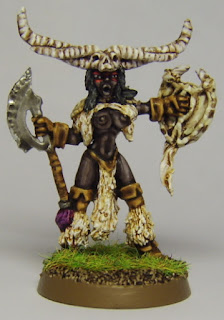 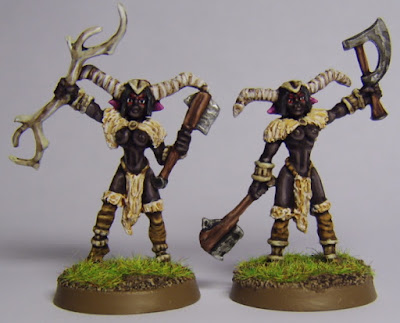 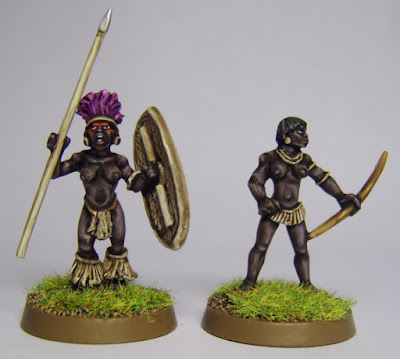 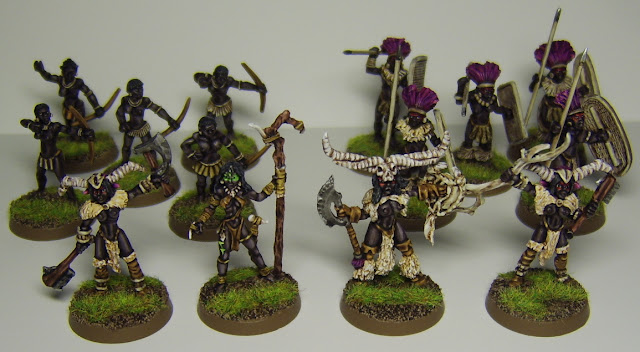 Tribal Women of Khanysha, Cult of Goddess Queen Talestri
Perks (5): Stealthy Agents, Animals (all, only the tribal archers are not)

Models: 14 figures
Posted by Katsuhiko JiNNai at 15:42 No comments:

Background:
Somewhere in central africa, 193X
From an hidden laboratory, an evil and mad scientist, working for the Red Ribbon Army, created some bestial hybrids, using animal and human DNA.
Some of the creatures free themselves and try to flee in the jungle.
The Commander Red ordered that Blue Korp must capture the monsters, especially the most dangerous: Bagi.

I played a modified scenario of "Death Trap". Bagi, the Terror league, was the major plot point. The Blue Korp (bot league) MUST capture her.
The other minor plots are three hybrids and a belgian hunter that was sleeping in his house, a witness.
All the minor plots are extreme perils (including the human, he have a gun)

Terror (me): the Pink Panther BAGI

The board, I had not some jungle scenery so I tried to do my best with what was available, my idea was a savana near the border of a jungle...

Bat Swarms "Hey this gallery is ours!" Here the leagues deployed, the Blue Korp won the initiative
Bagi won a new friend, a male lion that seem like her (Friendly local) and deploy about 6" from the edge of the board.

the Blue korp deploy about 12" from Bagi. an overview of the deployment

The Red Ribbon won the initiative. One soldier move to the belgian hunter, but he fail to calm the nervous guy and win the minor plot.
Soldat "Please mister, For your safety, go back into the house."  :)
Belgian hunter "Hey! No german can say to me what I must do in my property!"  >:(

Ranka receives a random peril, but she won the challange.
Harpy hybrid doing a swooping flight over ranka "SKREEEEEEEEEEEEEEEeeeeeeeeeeeeeeeeeee!!!"
Ranka "Damn! Be careful with those claws! Well, I suppose I yet found one of our prey"  :? and then she move to the harpy

another soldier come to help his mate, they finally win the challange and take the minor plot.
Soldat "Sorry mister, but you must come with us. We will not accept a NO as an answer."  >:D

Two soldiers move to Bagi and her new friend, one of the soldat fire, but bagi is safe. Meanwhile, Klaus move to one of the minor plots (the male werewolf)
Soldat "Hey, look there! The pink monster and a lion! Open fire, but use the sedative bullets that the doctor gave to us, we must take her alive!"

Bagi and her mate rush the two soldiers. One of the soldier is down after the rush of the lion, but the other is safe.
Lion "ROAAARRR!!*"*how you dare to shoot to my partner?! Ranka jump on the hill to capture the Harpy and won the challange. the Harpy is her now.
Ranka: "You finally learned to obey, monster!"  >:D Meanwhile, the brawl between bagi, the lion and the two soldiers continue. the first soldier recovered, but it'is down again and will be KO, the other is down too.
Bagi "Now I'am the PREDATOR and you will be MY prey!"  >:(

The other two soldiers run to help their comrades.
Soldat "Fast! Our comrades are in trouble!"

Bagi and the lion continue the brawl with the soldier, he is down again, but he will recover again the next turn.
Bagi "Stay down human!

Bagi and the lion rush the other two soldiers, ignoring the first soldier still down. The two soldiers will be KO.
Bagi "We are winning! Thanks my feline brother you are a precious ally!" ;) She say caressing the lion.
Lion: "Puuuuuuuuurrrr"  :-*

Ranka run for the next minor plot and win the challange in the perilious area.
Ranka "Stay quiet kitten... I SAID stay quiet!"  >:( The lion rush to finish the last soldier. Now he is down and will be finally KO.

Bagi take the minor plot from the defeated soldiers. The belgian is free now, and bagi win the initiative.
Belgian Guy "A sexy pink lioness? I thought that after an hangover a man could only see pink elephants."  :o

Bagi has the initiative, so she rush Klaus. During the brawl, Klaus is down, but will recover next turn. The minor plot is free.
However Bagi fail the challange to win the minor plot and she must dodge to avoid it. Meanwhile the lion run and Ranka move to the minor plot.
Werewolf "M-mating season!" drooooooooooooool :-*
Bagi "Hey! Don't touch me, doggie!!"  :-X The lion is furious! He is the alpha male here. How dare this big doggie to harass HIS female? He MUST submit.
So the lion try to win the minor plot werewolf and finally take it. Bagi rush Klaus that is KO too.
Bagi "No more hunters in my way, I'm finally FREE!... but still I have a little problem here... "  :? she say looking to the overexcited lion

Meanwhile Ranka is finally near to her next target, ignoring that her comrades are all defeated. But she fail the challange!
Ranka "Damn! Come here doggie, where are you going?! Ach, I've lost her! Well... and where the HELL are my comrades?  :-[

It's a 193X Weird Wars league of italians, to search for unknown and mysterious artifacts from alien, occult or ancient origin.

Background:
The GABINETTO Ricerche Speciali anno 1933 (Cabinet Special Researches 1933 year), in charge of collecting, investigating and suppressing UFO data, was founded in 1933 on orders from Il Duce Mussolini, after a crashed disc aircraft of unknown origin was recovered from Lombardia. Gabinetto RS/33 have links with the Fascist secret police OVRA and with "Agenzia Stefani," the regime's news agency in charge of disseminating Fascist propaganda. Italys most famous scientist and inventor, Guglielmo Marconi, is the director of the Cabinet, which also include several other prominent Italian astronomers, scientists and aeronautical engineers. Marconi believe that alien life existe on Mars and that contact with the “Martians” would be possible from powerful radio transmissions. Some of the most important researches are about the Death Ray, flying saucers, flying Wing and first Jet aicraft Campini-Caproni C.C.2.
One of the best field agents of Gabinetto RS/33 is the loyal ex "Moschettiere del Duce" Benito Littorio Volpe that formed a special team the LEGIO PROMETHEUS in 1937, the same year when suddendly Marconi died.

I enjoyed to do some research about italian interwar secret weapons. I was sure that Italy had some urban legends too, and Gabinetto RS/33 seem an excellent base for any weird wars ideas. There are many strange secrets in Italy, not just from alien or secret weapons, but from occult or mysterious sources too. 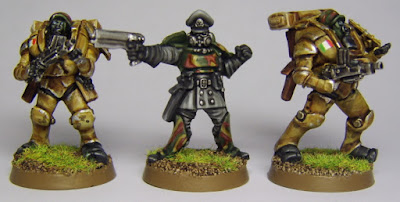 Captain Dante Littorio Volpe nickname "Capitan Littorio" and his bodyguard of paratroopers with power armor, painted with the paint scheme of the elite italian paratroopers in Africa: 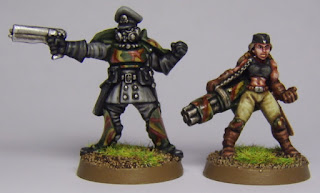 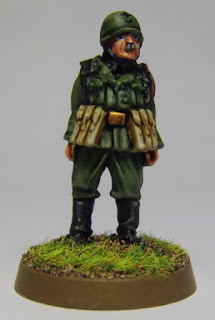 Sergeant Galeazzo Musolesi
I used an Artizan miniature, including a new helmet and a little conversion on the jacket.
He is based on the character of Galeazzo Musolesi, from the italian "Sturmtruppen" comic
Here the original character: 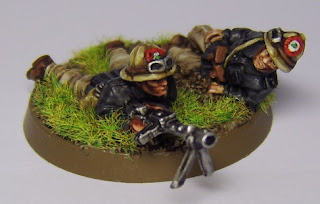 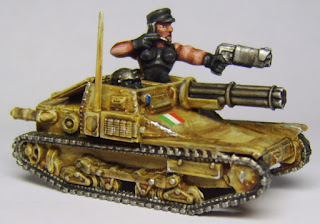