Today I played my first game with the "Sellswords & Spellslingers" solo/cooperative fantasy miniatures game. I chose "The Healer" basic scenario, but instead of the brigands I used Chaos Barbarians as foes.

Background:
Sigfrido has a nasty leg wound, his closed friends are taking him to Anita the Healer. However a gang of Chaos Barbarians has decided to end the Anita's life because she refused her service to their leader.
Elves: "Seem that our good friend Anita is in trouble, some bad guys are approaching menacingly to her house."
Mortis: "I recognize them, they are pitiful lesser minions of the Chaos Gods... Malal be praised, today I will spill their miserable blood for my deity!"
Sigfrido: "Anita is a good friend, she has treated us on numerous occasions. It is time to repay our debts of gratitude. We will break up those bad boys!"

Overview of the board 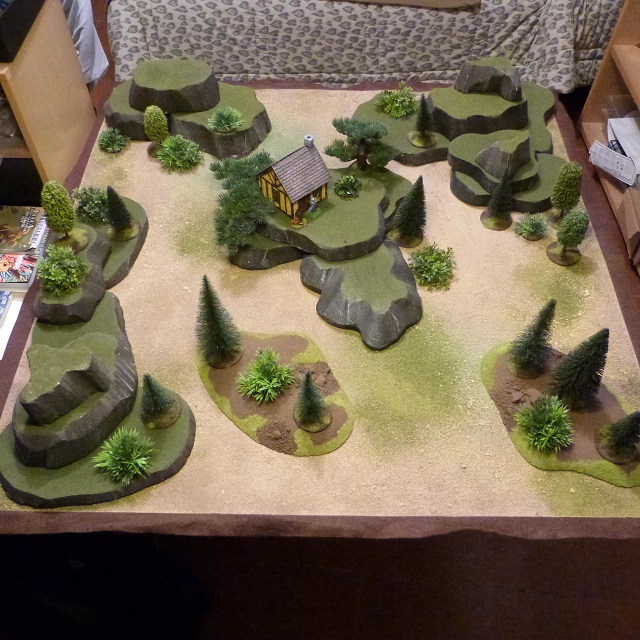 The healer house. Anita is hiding in her hut during the game. 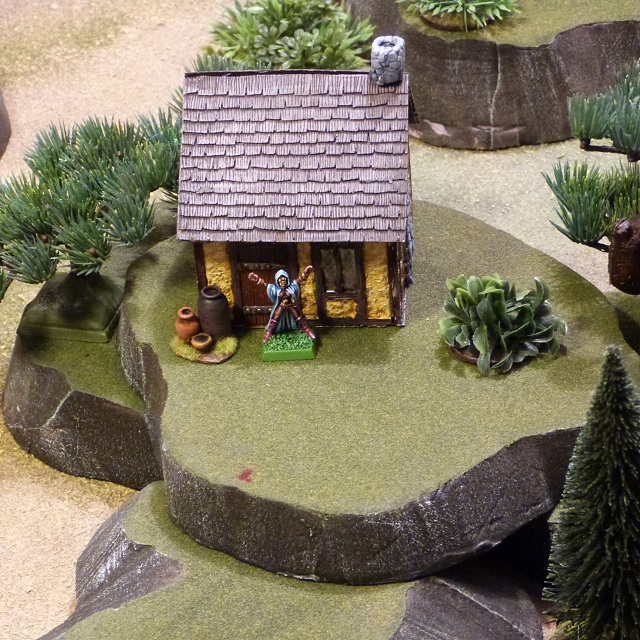 Deployment of the Foes and PCs. 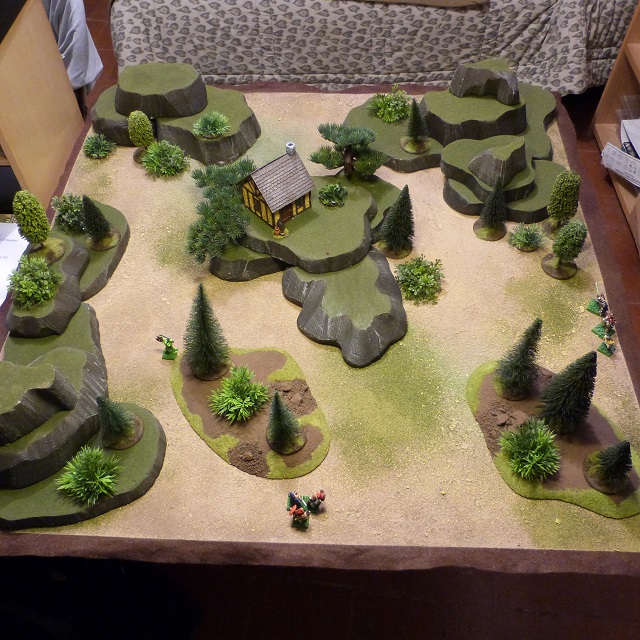 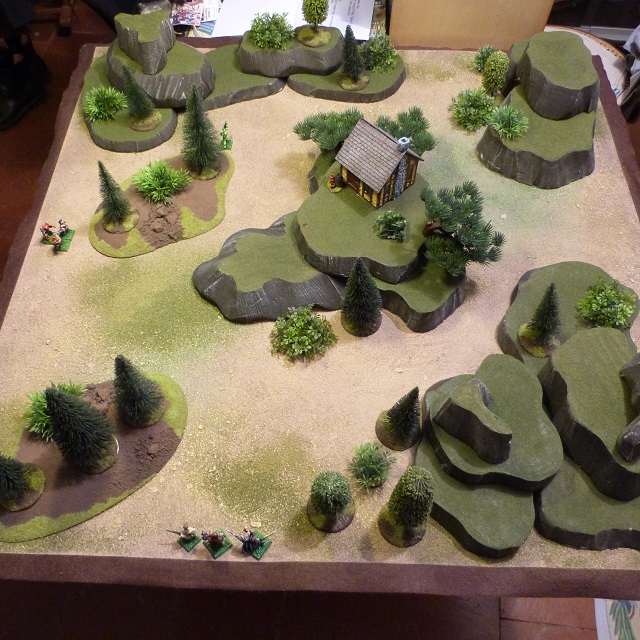 The PCs activate and make their move, the horde of Chaos Barbarians move too.
Sigfrido: "Move faster, my friends! We must not let that scum approach the house!" 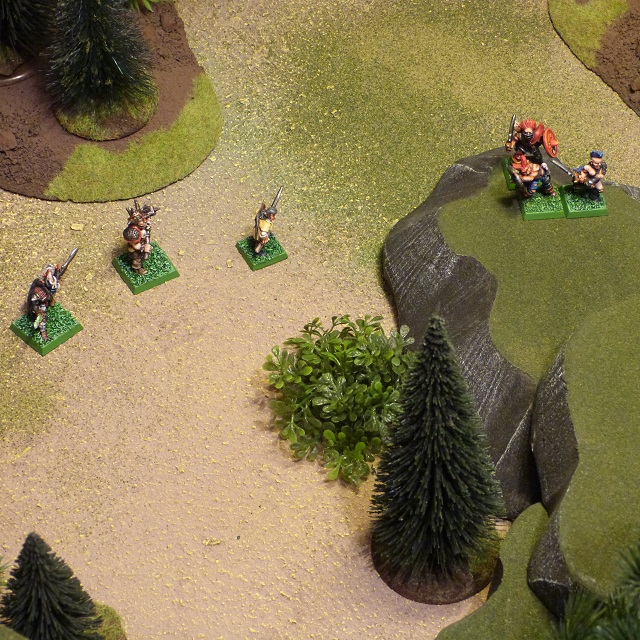 Elves hit one of the hordelings, killing him.
Elves: "The first nice shot of the day!" 😉 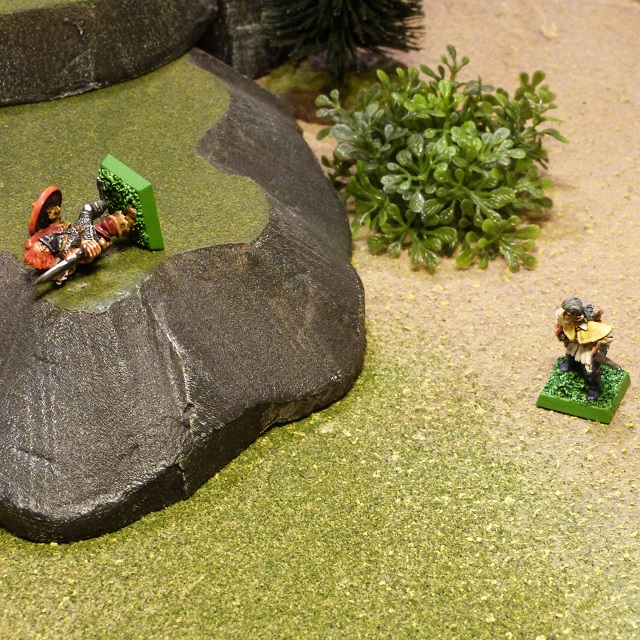 The Chaos Barbarians charge Mortis, but he win the fight and kill one of the attackers.
Mortis: "May your death please Malal!" 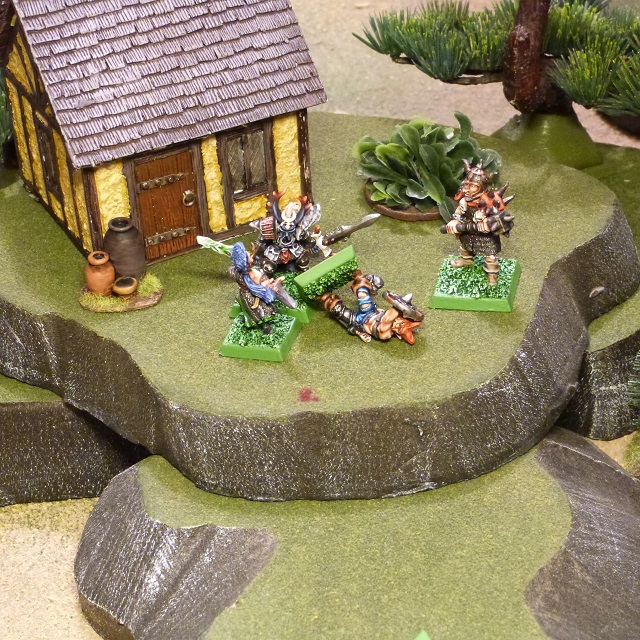 Sigfrido move in the house and take Anita.
Sigfrido: "Come with me if you want to live!" 😎
Mortis is wounded by the last Chaos Barbarian.
Mortis: "Not bad, but this is not enough to defeat me!" 😈 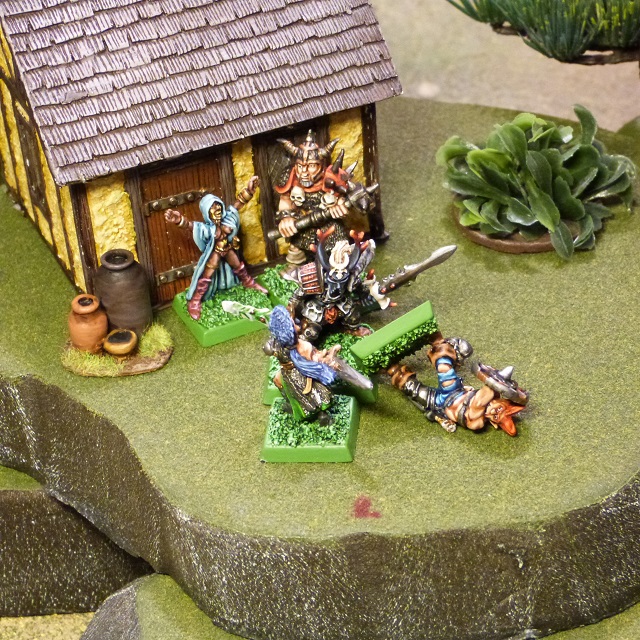 Elves make two shots to the Chaos Barbarian Boss, killing him.
Elves: "Their Boss is gone!" 😃 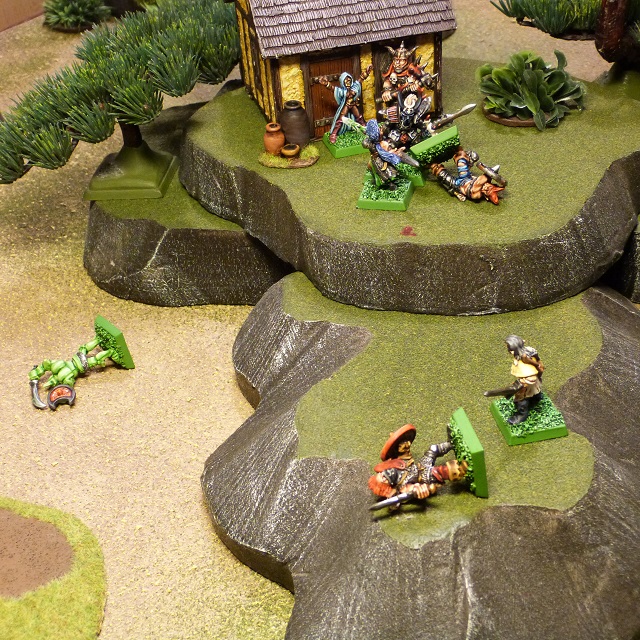 Some wandering goblins are attracted by the fight and move towards the PCs. 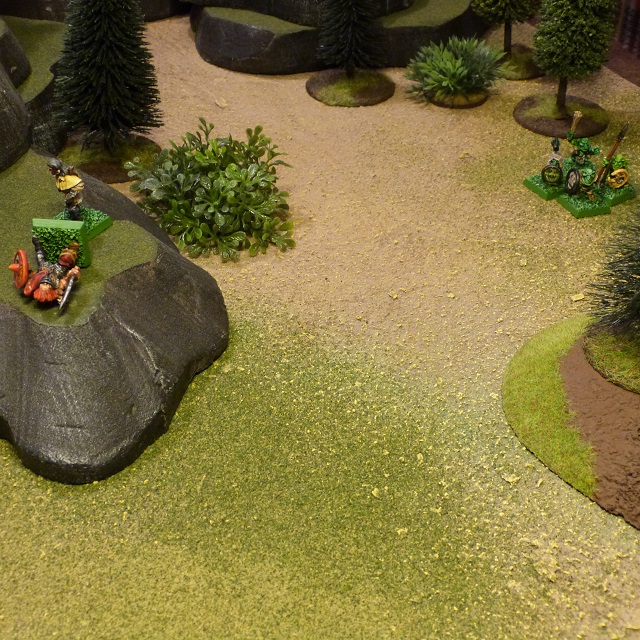 The last Chaos Barbarian is finally defeated by Mortis. Sigfrido moves away with Anita at his side.
Sigfrido: "The Chaos Barbarians are defeated, but some nasty goblins are arriving, we must leave this place!" 😬 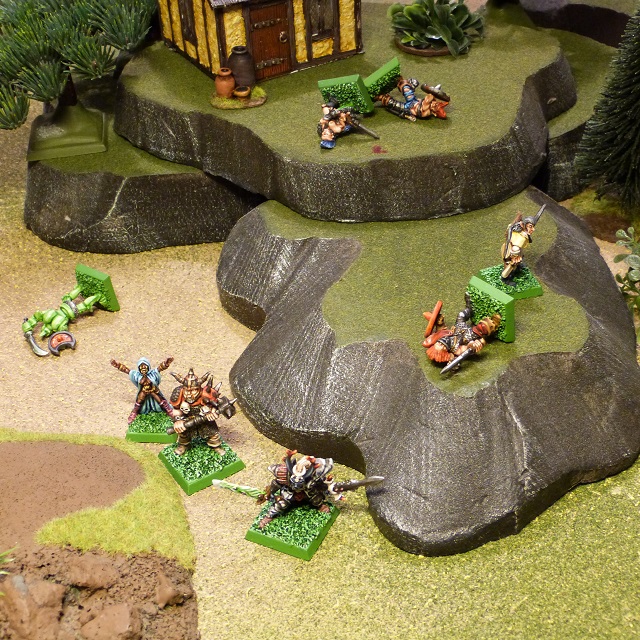 Elves shots to the goblin horde, two goblins are dead.
Elves: "Do not worry, Sigfrido, I will slow them down with my arrows!" 😏 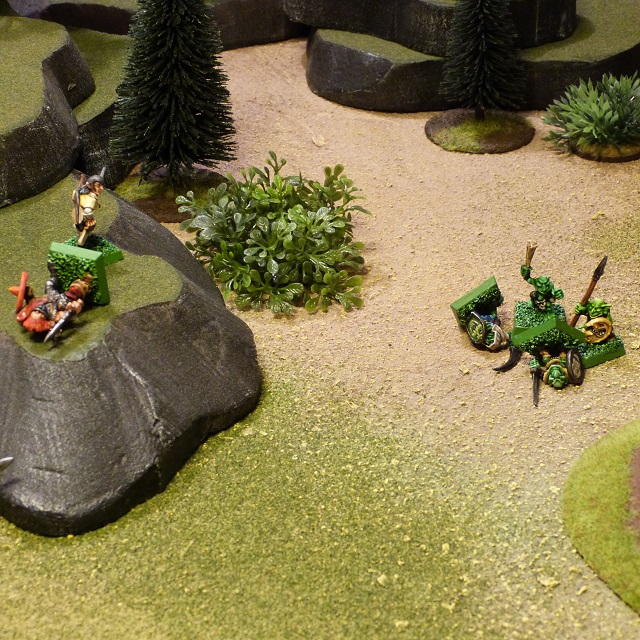 Mortis charge the last two goblins, killing them.
Mortis: "I will not retreat just for two pathetic goblins! For Malallllll!" 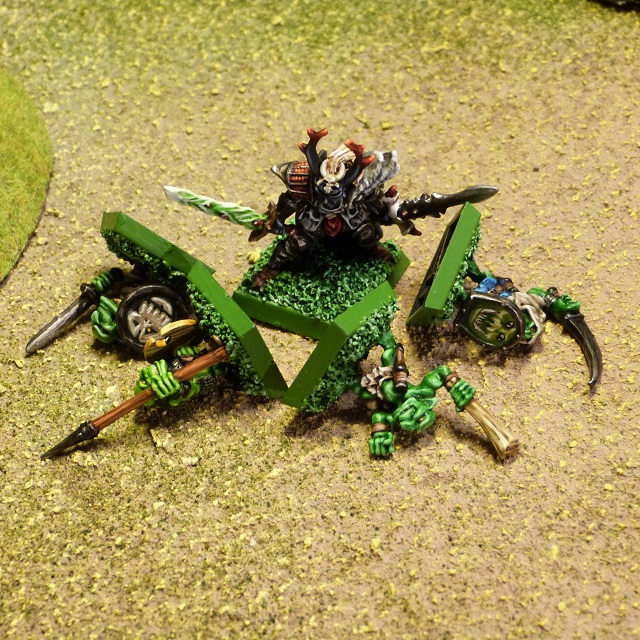 With no enemies to stop them, Anita is carried to safety off the board.
Sigfrido: "Now you are safe, Anita!" 😁
Anita: "I am deeply grateful to you and your good friends, Sigfrido! Now leave to me you wounded leg, I will cure it immediately." 😊 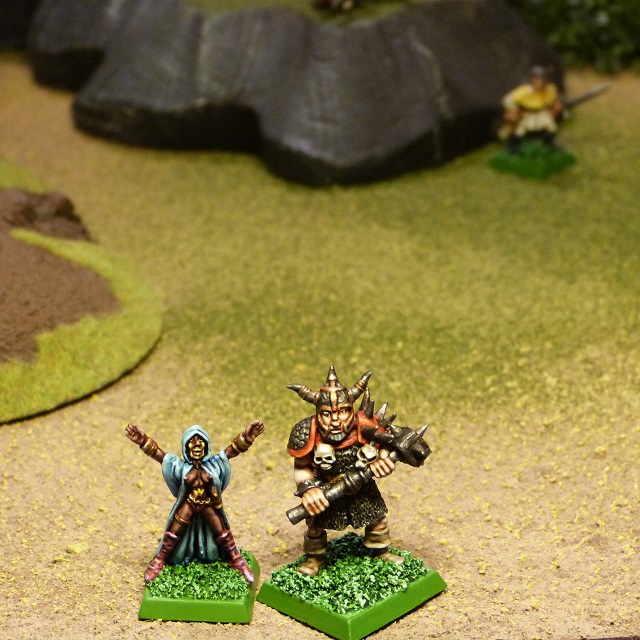 Posted by Katsuhiko JiNNai at 18:04