I repainted one of my reaper miniatures, it will be fine as a female alien bounty hunter, her name could be "Ranna". Maybe an hybrid between a dubravan and an aeosian parents. 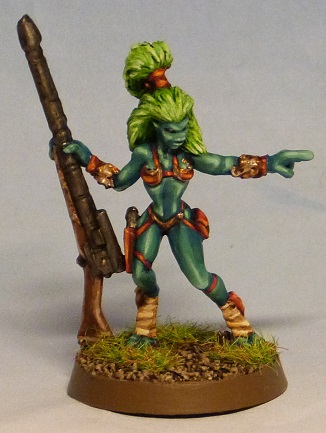 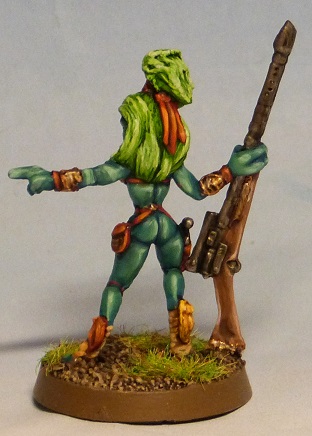 The miniature with its old paint job: 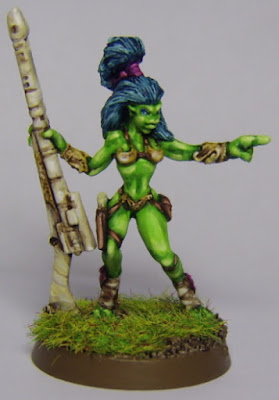 A groupshot with the Bounty Hunter Ranna and her imperial employers.

Posted by Katsuhiko JiNNai at 04:22 No comments:

Looking for alternative miniatures I could use alongside my true 25mm West End Games Star Wars miniatures, I've found this Ral Partha Europe (Dark Eye) miniature. The scale is fine. I painted it as a semi-human female Devaronian wild hunter. 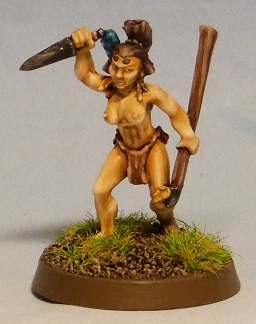 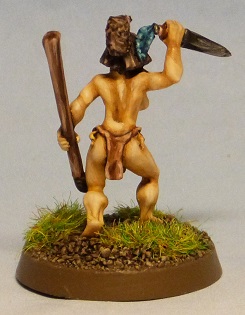 A picture of a Devaronian female 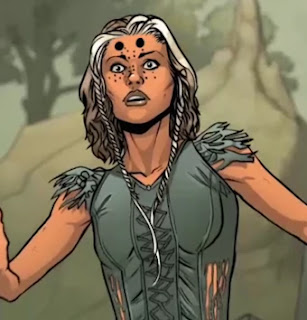 A comparison size picture with a WEG Stormtrooper. 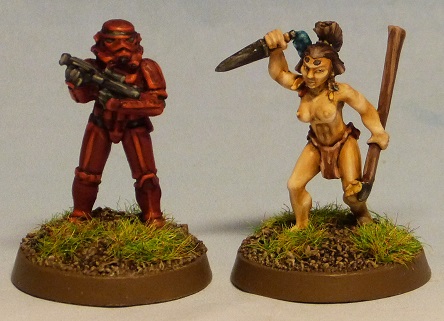 I painted Luke Skywalker with his Tatooine outfit. 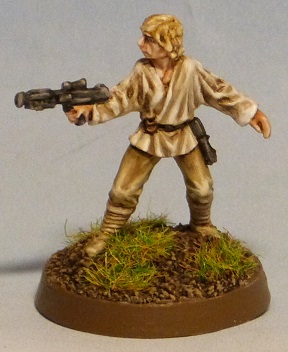 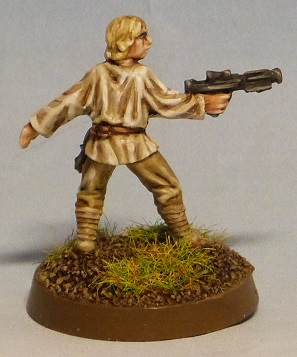 Posted by Katsuhiko JiNNai at 02:33 3 comments:

I painted more crimson guards, including a Commander (black pauldron).

A Groupshot of Moff Gul Reda and his Crimson Guard.
Posted by Katsuhiko JiNNai at 19:14 3 comments:

I painted two WEG stormtroopers with a red paint scheme, they will be the elite bodyguards of Moff Gul Reda. I'm planning to paint three more crimson guards: a commander, a simple guard and a guard with heavy weapon. 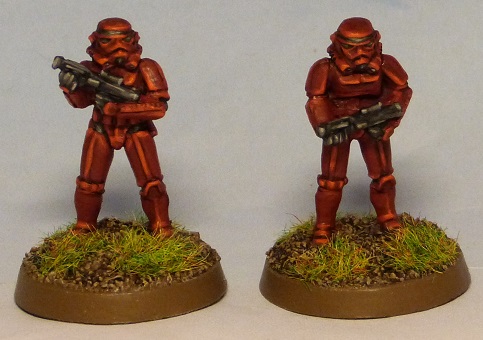 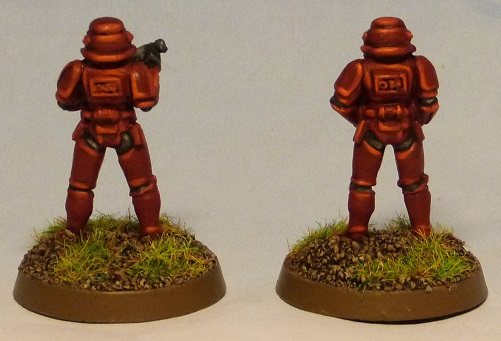 I was ispired by the Emperor's Royal Guard Stormtroopers. 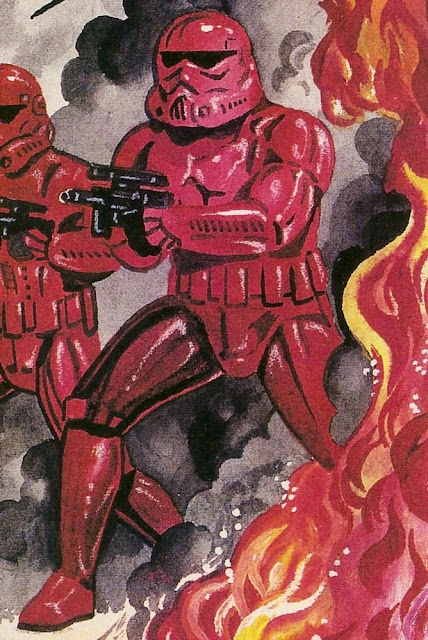 Posted by Katsuhiko JiNNai at 13:45 No comments:

Here my first Star Wars miniature. A vintage West End Games Imperial Navy Trooper with a minor conversion (head/mask and rank insignia). Then I created a new character that I will use in my Solo games: Moff Damon Gul Reda. 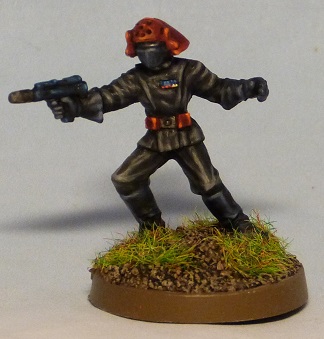 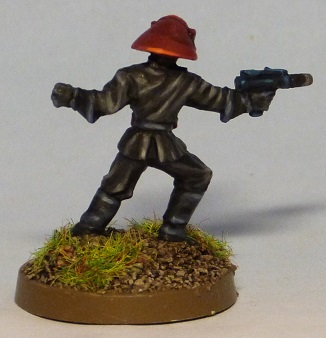 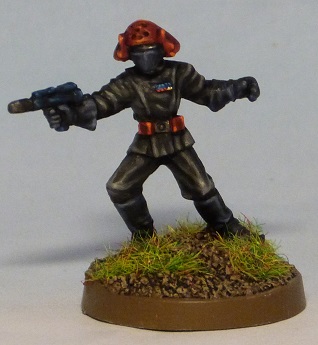 The origins of Damon Gul Reda are surrounded in secrets. He always wears a sinister battle helmet that conceals his features. It is supposed he was born to a very influential family on Coruscant. However, as far as anyone knew, Gul Reda has no family of which to speak.
Force-Sensitives find the presence of Gul Reda extremely disturbing. Gul Reda can nullify force powers, and if he is in close quarters to his targets his very existence drains the strength from force users and even normal beings. The uniquely designed battle-helm of Gul Reda, can either muffle or focus the Gul Reda powers as required. Guld Reda therefore specialised in jedi-hunting during the Great Jedi Purge.
With Palpatine's backing, Gul Reda became Moff of the Oplovis Sector in 3 ABY. After the fall of the Galactic Empire, Gul Reda remained part of the Imperial Remnant and retained control of a semi-independent sector. However, despite having both the firepower and the confidence, he did not mount a major attack on the New Republic, rather he concentrated on consolidating imperial power in his sector waiting the return of the Emperor.
Gul Reda proved to be a meticulous and efficient Moff and expect the very best of his subordinates. His sector became exceptionally well administered. Some speculated that Gul Reda served as an Emperor's Hand before his appointment as Moff.
Although at times ruthless, Gul Reda isn't uncaring, he helped to consolidate the Empire's control of the Oplovis Sector providing peace, order and prosperity to the loyal imperial citizens, but severely punishing the rebels and outlaws who still oppose to his government. His philosophy can be summed up in the motto "strict but fair". From 12 ABY, Gul Reda joined the Council of Moffs in the Pellaeon's Imperial Remnant.

While looking for ispiration for a intriguing imperial character, I was ispired by an image of the "Sith Eternal Fleet Technician". 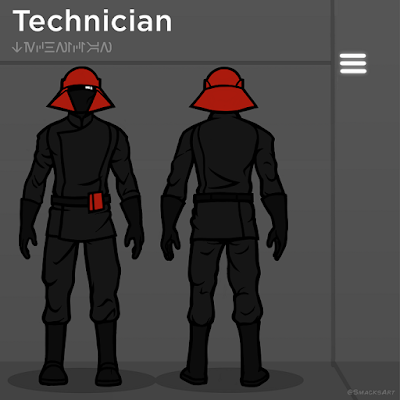